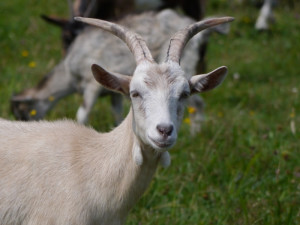 Goat milk has been known and used by humans for thousands of years .Goats were among the first domesticated animals, since they are easy to breed and resistant to unfavourable weather conditions or scarcity of food. Their milk contains more favourable proportions of amino acids (including the exogenous amino acids which are not produced by the human organism and have to be supplemented). It is also more easily digested: it concerns proteins (including casein), lactose, and also fats. It is also much less allergic than cow milk: more than 40% of people with the so called diathesis is able to consume goat milk. It is recommended that children with this kind of allergy drink goat kind milk instead of milk equivalents (as, for example, soy milk can also be allergic).

Goat milk contains also significant amounts of vitamins (especially D3, niacin and biotin) and minerals (magnesium, calcium, iron, phosphorus, potassium and others), and their proportions are more beneficial for humans than those of cow milk. In this respect it is similar to human milk. Thanks to vitamin D3, which improves absorption of calcium, bone and tooth reinforcement can be observed among people who drink goat milk. The fat contained in goat milk contain, among others, valuable Omega-6 acids, as well as a significant content of medium-saturated fatty acids, which do not accumulate in a form of fat tissue.

Even more valuable than goat milk itself are milk-based processed products – including cheese (especially matured cheese), made from unpasteurized milk. The use of unpasteurized milk is one of the most important differences between cheeses manufactured in a traditional way, on small farms (such as ours) and those from industrial factories, which are produced in large processing plants according to standardised technology. Due to the use of raw milk, our cheese does not lose its natural taste, and a cheese-maker is able to create a signature product – different from anything else, and unique only to themselves..